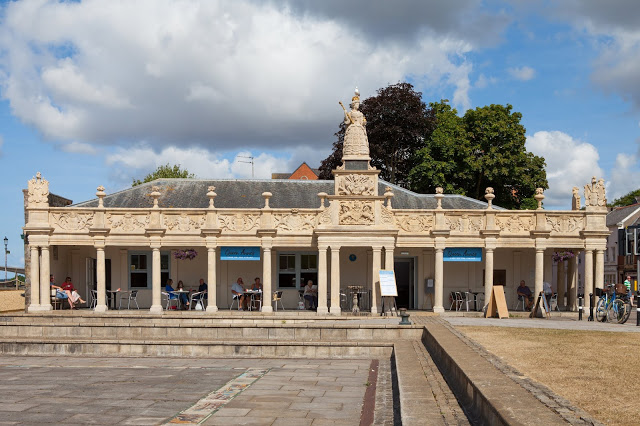 We’re delighted to announce the RICS Awards Nomination for the project we designed to convert Queen Anne’s Walk in Barnstaple to a new restaurant / cafe / events space has been nominated for the RICS Social Impact Awards 2020 South West! The premises consists of Grade I and Grade II listed elements which have been sensitively restored as part of the conversion. The building includes the stunning stone colonnade dating from 1708 where merchants met to strike deals in the port of Barnstaple. Behind that are two halls and ancillary spaces that started life as public baths, before becoming a Masonic Lodge, then an elderly persons rest centre and lastly a small museum.

A key part of the design process was to retain the existing spaces and make as few changes to the fabric as possible. Our research uncovered previous window openings into the walkway, reintroducing these was critical to bringing in natural light to the interior. We were also able to open up the windows in the riverside hall allow views of the water from inside and create a high level window in the middle hall. We’re delighted to announce that the project we designed to convert Queen Anne’s Walk in Barnstaple to a new restaurant / cafe / events space has been nominated for the RICS Awards Nomination for their Social Impact Awards 2020 South West!

Finding a viable new use for old buildings is often critical to their conservation. In this case the cafe / restaurant has brought many people to this building for the first time and in turn to Barnstaple’s wider waterfront area. The result is that an important part of the town’s riverside heritage has now been brought back to life. So we are looking forward to the awards evening in May!